This Jake and the Neverland Pirates birthday party was so much fun to plan and put together.  It’s been Pinned so many times since we first shared it a few years ago!  Hope you enjoy another look at it!

Pinterest was a great resource for putting together some fun ideas for this Jake party–I’m willing to put in a little time and use whatever talents I have to make a party special, and it helps keep me from throwing down tons of money.  I try to focus my time and energy on things that the kids will get a kick out of, since they’re the reason for the party!

I found and adapted several ideas that could be used for a Jake party, and many of them could be tweaked to go with another party theme.  There were some hits and misses in this party, but all that mattered was that my little guy and his friends had a great time (and it didn’t cost a fortune–yay!).  So here it is: the good, the bad, and the ugly of our little adventure into Neverland, along with links to the Pins that inspired me:

Scavenger Hunt: I’m not one for planning tons of activities at birthday parties, since it always seems like I’m interrupting happily-playing children to stick to the party agenda.  I’m also not big on treat bags, since they either cost a ton to fill, or they’re filled with trinkets that end up strewn across the house.  So for this party, we settled on one activity.  The kids decorated white paper bags with pirate stickers (3 sticker booklets from Pat Catan’s at $1 each, and I used some of the stickers for decorations too).

When they were finished decorating their bags, they each received a “treasure map.”  The “map” had a list of pirate-themed items that were hidden around the basement, along with the quantities that the kids could take.  They included “Jake” themed items like pencils, tattoos, and Gold Doubloons from the Target Dollar Spot; extra Christmas candy (gold-wrapped Rolos were “gold nuggets,” red & green-wrapped candies were “gems,” and candy canes were “Captain Hook’s Hooks”); and clementines + Sharpie marker = “Smiley Pirates” (adapted from a Halloween jack-o’lantern Pinterest idea).  Another idea would be packs of Jake fruit snacks.

The kids loved it, it served as both an activity and take-home treat, and I probably spent about $1 per guest on the whole shebang.

Themed food and decorations:  The party stores have tons of decor and accessories for every party theme.  I’ll order plates, and maybe a tablecloth, but I usually don’t go all out on expensive paper products.  Solid-colored “extras” like napkins, cups, etc. usually do just fine for considerably less cost, and that’s what we did for this party.

To pump up the “piratey” theme, I made a few signs using a pirate font in my word processor, then decorated them with some of the pirate stickers.  We also used the boys’ pirate ship toy as a centerpiece on the food table…pirate theme accomplished with minimal cost. 🙂

We had a mid-afternoon snacks & cake party (another way to help keep costs down vs. hosting your party at mealtime).  For each snack, I thought of a “piratey” name, and made a tag using the pirate font.  We had “Fish of the Sea” (goldfish crackers), “Cannonballs” (Whoppers), “Skully want a Cracker? …and cheese” (Skully is Jake’s parrot), “Tick-Tock Croc’s Veggies & Dip,” and “Tropical Island Fruit.”  Simple prep, all stuff kids like, and they got a kick out of the names.  Easy peasy.

Well…maybe not “bad,” just not as good as they could have been.  My little fleet of orange pirate ships on their seas of blue jello actually turned out pretty cute, but I thought I’d get creative and add a gummi fish to the jello “water” in each cup.  Bad idea.  Something happened with the gummies and the jello–the fish got squishy and gross, and caused a watery puddle on the top of the jello that needed to be poured off before I put the orange boats on for the party.  The kids didn’t seem to mind too much–they just fished out the slimy gummi fish and ate the rest of the jello.  🙂  So for future reference, no gummis in the jello. 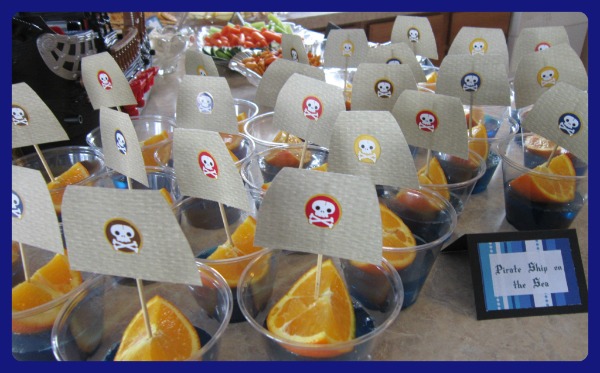 Two big boxes of blue jello made enough for 24 cups, and I was able to do that part in advance.  The “sails” were just scrapbook paper taped onto bamboo skewers, with pirate stickers on them.  The morning of the party, I cut the oranges into quarters, stuck the sails in, and put them in their water.  Overall a cute, fairly simple idea (minus the squishy gummi fish).

Ugly might be a little strong for the cake, considering it ended up well, but it sure was ugly for a while.  I love decorating cakes for my kids, and have made some pretty cute ones over the years.  This time though, my cake decorating skills outpaced my cake “structural engineering” skills, and the dumb thing collapsed on me.

Long story short, I thought that if I took three half-circle layers and stuck them together, then put them with the flat side facing up, I could get both the curved bottom of the boat, and the flat deck.  As I built up the front and back of the boat with extra pieces of cake, the ends got too heavy, and the whole thing started to crack and collapse.  Not cool.

We propped up the back with a graham cracker and some bamboo skewers, and I decorated over the graham cracker so it wouldn’t look quite so much like a mistake.  Then the morning of the party we woke up to find that the whole front half of the cake had collapsed too, so we squished it back together with more graham crackers and propped it up with skewers, and it was good enough for the party.  If you don’t look too closely, it’s still fairly cute! 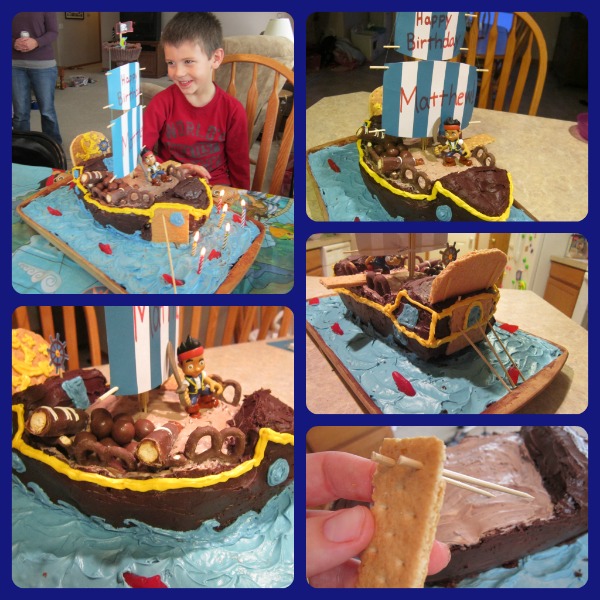 So…if you attempt to make a cake like this, just start with flat pieces, and stack them up to create the shape you want.  That should work fine, with a lot less frustration.  For the other cake accessories, I made the crow’s nest by melting some chocolate candy melts and putting it in a cupcake liner.  After it cooled, I poked a hole in the center with a skewer, then used a marshmallow and a little more melted chocolate to hold the “mast” (a bunch of other skewers around the center skewer) in place (I rubber banded them together while the chocolate cooled).

I made the sails out of paper, more bamboo skewers, and some thread to tie them all together, and kind of hung it from the chocolate crow’s nest.  The other accessories were chocolate-covered pretzel rod cannons, mini-pretzel railings, a graham cracker “plank” and Whopper cannon balls, along with a thoroughly-washed plastic Jake toy.  The gummi fish worked well as decorations in the “sea” around the ship (a flat cake topped with blue icing)–at least the fish were good for something! 😉

So there it is, our Jake and the Neverland Pirates party.  We planned for about 23 kids plus about 12-13 adults, and I think I spent less than $60 to put the whole party together.  Everyone had a great time, and I had a super happy little pirate as he celebrated with his friends.  Let me know what you think, and if you have any other ideas or suggestions, please share them in the comments so everyone can benefit.

If you found this site through Pinterest, we invite you to stick around and check things out–we specialize in deals, coupon matchups, and frugal living, and we’d love for you to join us as we do life “on a Shoestring.”

Be sure to check out our other great birthday party ideas: 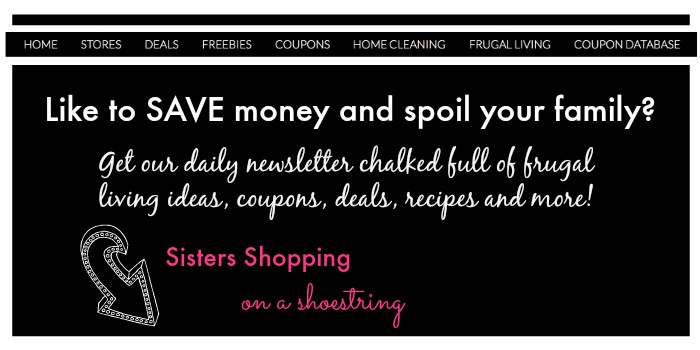